General Discussion: A Reason For Not Living In Scotland

Did I say that was any better?

If the Scots want out then good luck to em. At least it would cripple Labour. So they will part with a thanks from me

Mrtyn wrote: Did I say that was any better?
Considering you called them stupid cunts I thought you was implying that yes.

That wasn't my intention. To make a vote on something as important as this without reading up on the facts is idiotic. There has been plenty of time to do it.

I'm not particularly patriotic in the saltire waving alba gu brath way. I want independence for a fairer society where our government has Scotland best interests at heart. I don't expect a utopia but think we will be far better away from Westminster. I wish everyone across the UK had that opportunity.

If staying together meant Scotland could help the rest of the UK give Westminster a kick up the arse and make a positive change nationally, I'd stay, but we are too small to affect that sort of change.

Fuck me, this blonde with the epic cans can be part of my country whenever she wants

How anyone can trust the man is beyond me. Deluded.

I refuse to get into an argument, but I will say this isn't about one man. I haven't based my decision on what he has said. I have based it on facts from unbiased sources. At least as unbiased as can be, because it is difficult to not let personal opinion creep in.Figures however don't lie, although the nterpretation of them can. The Yes side are guilty of being overly optimistic at times. The No side are being ridiculously pessimistic. Each side has their own agenda. I didn't make my decision because of any politician.

That pretty much sums up my position too Martyn. 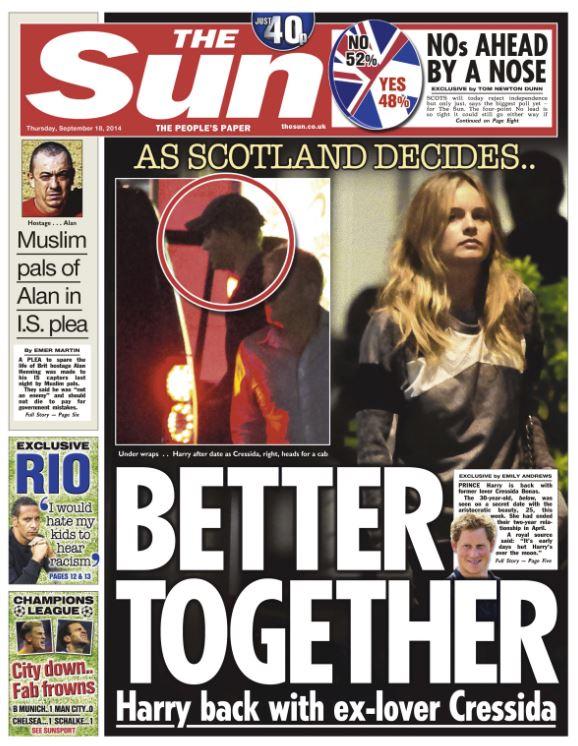 What are voting Andy? If you don't mind me asking.

It's not about one man. He's promised an easy ride into the EU, it's been the basis of his argument and he's been found out to be lying about it. I'm not arguing, I'm so fed up of the whole thing by now, but those lies shouldn't be ignored. It's your vote, but crazy if you want to believe it.

And I ain't biased, he's a client. We all know full well scotland won't get full devolution if they vote no.

I'm not saying I believe everything he says. I'm of the opinion that everyone will do what is in their best interests if there is a Yes vote. It benefits everyone if we join the EU asap. They wont make it any more difficult than necessary. I know it won't be perfect, but I am confident we will be better on our own. I also couldn't give a fuck if I'm any better off financially or not, but I believe we will be. I'd be happy if we can stop the need for food banks, help families out of poverty and guarantee our NHS. These are all achievable goals as an independent Scotland.

There has been far too many lies about how we would manage financially. Quite simply we would manage just fine. We aren't reliant on oil but we have lots of it. It certainly helps. There is far more more than the Better Together campaign will admit. I've worked in the oil industry for almost 8 years now and my uncle has for over 30. News travels fast. You believe Alistair Darling all you like. Do you really have any idea how much oil there is? Look at Clair Ridge as an example. Don't listen to any side of the debate. Look at what the industry is saying.

so is this vote for freedom a good or bad thing? What say you scots

EssexBoyII wrote: If the Scots want out then good luck to em. At least it would cripple Labour. So they will part with a thanks from me
Wishing Scotland off so we can live under Tory rule, I couldn't think of a better way to make both sides of the debate hate you regardless.

I just found about about this today

snaye wrote: Yeah speak up Scots none of you have said anything in this thread

None of this will be easy, and to be fair to Alex Salmond I don't think he has said it will be easy but he has perhaps underplayed the complexities of some issues. He is a politician after all.

In the event of a Yes vote it's in the interests of all parties - Scotland, the rest of the UK, the EU - to negotiate settlements, despite what may have been said about certain issues being non-negotiable during the referendum campaign.

The currency issue will have to be resolved one way or another, and while we might not end up with the preferred scenario we will have to make it work. Other small countries manage with their own currency, or using the Euro, so they're not insurmountable problems.

Likewise with the membership of the EU. A lot has been asserted as fact during the campaign despite no real precedent of this situation, and with the backdrop of certain EU members not wanting to encourage separatist movements. But I do think it's in the best interests of the EU to have Scotland as a member, so I believe negotiations would lead to Scotland joining within the course of the transition period. In a worst case scenario joining the EEA would be an option.

The irony of the No campaign warning that as an independent country we will be outside the EU when there's an upcoming in-out referendum on the table in the UK has not been lost on people.

Burny, you say that Alex Salmond has been found to be lying and then say that full devolution is not going to happen in the event of a No vote despite that being promised. Looking at the choice in front of us from that point of view would you rather have close liars that you can vote out or distant liars that you can't?

For me the biggest issues here are potential, fairness and democracy. I don't think Scotland has achieved its full potential, although it's heading in the right direction, and that independence would allow us to shape the country in the way that we wanted. With no House of Lords and a chamber which we, as an electorate, are electing directly there will (hopefully) be more accountability amongst politicians.

For those reasons, and many others, I will be voting Yes.