cheeky bump - but anyone know of any good shops in Barca, off for the weekend tomorrow and wouldn't mind having a look around

I'm going in May for one week with the missus, and spending one night in Girona for a trip to El Cellar de Can Roca. It'll be our second time going there, so we've done most of the major tourist spots before.

Got a few things planned like a cable cart up the mountain to see the Montserrat Monastery, the botanical garden, maybe a trip to this http://www.airedebarcelona.com/ for one afternoon.

Looking for any other suggestions, or anything new that's popped up in the past year or so?

Also any recommendations for clubs and good jazz bars, as the missus is keen to check out the Spanish night life. We're staying in an apartment near Parc de L'Espanya Industrial so ideally looking for somewhere within walking distance. Probably wishful thinking though…

Moog is pretty close to there, depends vastly on how into fashionable house and techno you are if you actually go.

Get the train to Sitges if you want some peace and quiet on your beach day.

have to here to eat:

and also this best place possible:

i did the bike, cable car and boat tour which was about £40 each…took 4 hours but on the bikes you get these mercedes electric things which are excellent. best way to see the place in such a short period of time and also covers a good portion of the city

Thanks for the suggestions guys, much appreciated. Cerveceria Catalana looks on point

Anyone got any tips for a lads weekend? Not going until late Sept.

eat off the main drags to avoid tourist restaurants

Looking at the following restaurants in Barcelona:

Anyone have any comments on the above?

No doubting the place but what's with the Barcelona resurgence? Everyone and his hairdresser seems to be going.

We're primarily going for El Cellar de Can Roca in Girona. However, the lady thought why not spend some time in Barcelona while we're out there as well, doing stuff we haven't done before.

^^ Going over Bank Holiday weekend in May (£55 return flights).

I've been several times before, so like Rira I'll just be taking it easy as I've done most of the main tourist spots before. Still my favourite city in Europe though

Where did you find 55 quid flights? Aint booked my flights for Prima yet.

eat off the main drags to avoid tourist restaurants
this is really key. only go to tapas bars that are busy (with spanish people). they are busy for a reason and you usually wont have to wait too long.

Double D wrote: Where did you find 55 quid flights? Aint booked my flights for Prima yet.
Ryanair from Manchester. Grim, but I can cope for 2 hours

People always bang on about the pickpockets and I know its an issue, but the only time I've seen anything in 3 visits was someone who looked like this get pocketed on the train after a Barca match 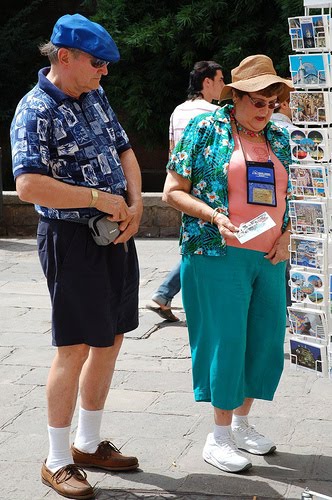 found this site absolute gold when I went last summer -

spent a lot of time getting lost in little back streets for hours which was always fun, came across
this huge park called 'Ciutadella Park' lovely there, little indian man selling ice creams etc at the gate in the summer, recommend these highly -

never once felt like I needed to be on guard, had everything in my tote bag secure at my side though, didn't have to worry about pockets that way. Even on the beach we just left stuff by our towels while having a little dip and they were fine.

Yeah jesus, the pickpockets in Barca are very real, had a lad try it on with me at about 5am, pretending to be drunk and messing around… couldn't get his hand in my pocket though

basically get your 17cms on and you'll be alright.

trailofdavid wrote:
Double D wrote: Where did you find 55 quid flights? Aint booked my flights for Prima yet.
Ryanair from Manchester. Grim, but I can cope for 2 hours
Urgh no fucking way, I flew Easyjet last time and swore never again, first and last time I'm ever getting on a plane you have to get shut in one of those horrible buses with a load of stags and hens to get in.

my brothers stag last year, one of my mates gets thrown out a club, guy comes over to console him, wallet taken. someone else on the stag decides to buy drugs on the street off someone, gets taken to an alley and gets mugged for his wallet and watch