General Discussion: ebay & paypal queries and questions thread...post anything you need to know in hurr

Every time I use them about a week later I will get "as per our terms, your shipment was too heavy / a different size, we are debiting you for an extra £5" and it starts to add up. I'm definitely not weighing / measuring it wrong either since I don't have the issue with anyone else. They are good apart from that but I just find it a scammy business practice.

swede wrote: whats up with parcel monkey? I use it last week and saved me a fiver on a parcelforce shipment. unsure how the fuck that works but it did

edlo wrote: Every time I use them about a week later I will get "as per our terms, your shipment was too heavy / a different size, we are debiting you for an extra £5" and it starts to add up. I'm definitely not weighing / measuring it wrong either since I don't have the issue with anyone else. They are good apart from that but I just find it a scammy business practice.

If you can't send it as a small parcel with royal mail international Tracked/Signed then definitely loads of money to be saved using a parcel broker site
I had that with Parcel2Go with a parcel sent to Hong Kong via Parcel Force. Parcel Force said it had a volumetric weight of 42kg or something silly - I sent a pair of trainers. They slapped a surcharge of £72 and said I had to pay it before I could use their services again. Fortunately the recipient helped me out, measured the parcel his end took photos and sent it to me, I also had a receipt from the post office when dropping it off that confirmed the actual weight. Sent them to Parcel2Go and after two months Parcel Force admitted it was a mistake and Parcel2Go dropped the charge.

Since then, with Parcel Force parcels I've taken photographic evidence of the measurements and weight before posting to cover myself.

Never had any issue with the hundreds of parcels I've sent with UPS, FedEx or DPD via Parcel2Go/Parcel Monkey/Interparcel. it just feels like Parcel Force can't weigh/measure things properly their end.

Ebay saved my ass with their "Global Shipping Program"

I thought I had un ticked the international shipping box and had my listing as UK ONLY, turns out I didn't. Messaged the buyer (in USA) to apologise say that this was going to get too expensive and that I would have to cancel the sale, he begged me not to cancel it.

Luckily as it was an auction I was covered in their Global Shipping deal, where you just send them the parcel, they ship it to anywhere in the world free of charge!

Whats the deal with sending abuse on eBay? Wont get banned will I?

Wait…so I can fake up an ebay auction, get my mate in the States to BIN then ship him some stuff he needs from the UK for a couple of quid?

illwill wrote: Wait…so I can fake up an ebay auction, get my mate in the States to BIN then ship him some stuff he needs from the UK for a couple of quid?
The buyer would take on the bulk of shipping and customs charges.

Guy bought some CPs from me from Russia, he said he was being charged £40 for delivery.

Take heed of a very expensive lesson learnt - there is no ebay "guarantee" when using a reshipping service.

Anyone notice a lot of relatively high-end items being sold out of Lithuania?

Whole variety of brands. Seems unusual for one of the poorest countries in the EU.

Some kind of seconds clearing house? Is stuff manufactured there?

Just had someone return an item (didn't fit but the size I listed is correct) and without any input from me, ebay have automatically refunded including the original postage. Annoying to have something returned anyway but £6 loss on postage too doesn't seem fair?

Did the same to me too and have an ongoing dispute with them about it as they should only do that if the item is not as described etc. Listing was private auction with no returns. Correct size and measurements in description.

Let me know how you get on. Nightmare if this is now standard procedure

Obviously it states when this payment will be cleared but just wondering when I'l be able to receive other payments normally without the wait, will it be once my first payment has cleared successfully? 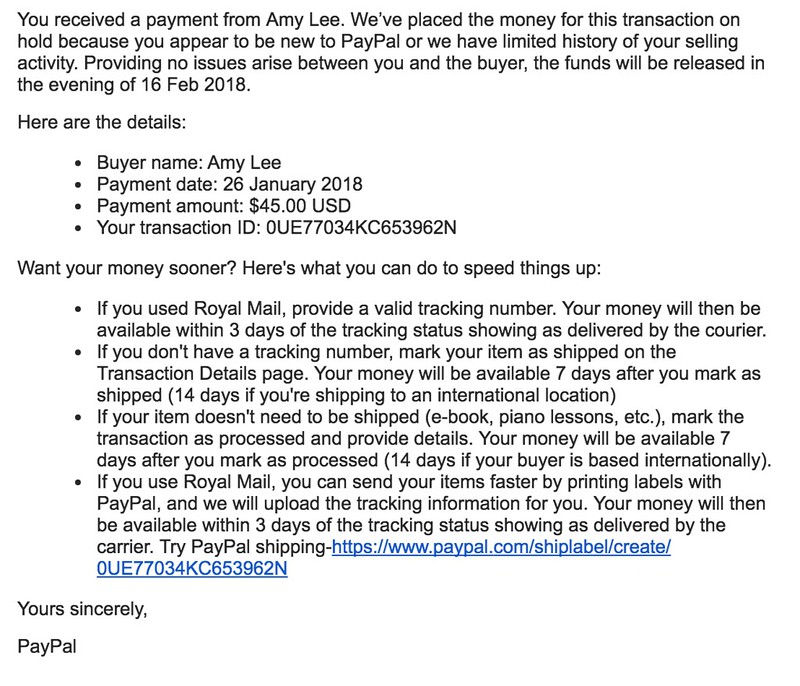 anyone had weird problems with the eBay return process recently?

I had a return request automatically approved by eBay yesterday, which is fine, and obviously I won't actually refund the cash until I receive the item back.

so it seems I can't use PayPal to buy anything until I actually issue the refund, even though could take a week or more to receive the item back.

is this right??? surely not. would appreciate any advice/anecdotes. cheers!

I just got some boots of the bay and they have a hole in the side, as if there has been a security tag. Anyway, seller won’t accept return as he said that they were described as having inconsistencies due to the natural leather. I replied that if he’d have disclosed a fucking hole, I would not have bought them. I have initiated a refund via ebay but have to wait a week to escalate. I am not a c#nt but I feel he is out or order. He said that Guidis are made like this and I should have been aware.
Thoughts anyone?

haven't sold much on ebay so probably a newbie question but I'm listing my nike x supreme SB blazers and it won't let me put nike x supreme in the title. however, there are plenty other listings that have it. what am I doing wrong?

maybe apply a custom selection to the brand and enter nike x supreme rather than select nike on its own?

Dee wrote: maybe apply a custom selection to the brand and enter nike x supreme rather than select nike on its own?
nice one, that did it. cheers!

…ordered sth with payment option klarna. returned one of the items and they 'fucked it up' and labelled all items as returned…now i have to pay nothing.
Should i tell them or just let it be? It's a big shop, no small store.
May sound stupid/obvious to some of you, but it feels weird…

Bought an amplifier from Germany, he shipped the transformer sepaerately due to weight restrictions. 2 packages, 2 trackers on ebay.

1 package is at my post office awaiting collection, 1 got flagged as "damaged" and is still in Germany and will be sent back to seller.

Even if he's legit (stinks a little like a scam to me?) I can't wait for him to reship because I'm moving interstate in a week.

If I want to get out of the deal should I pickup the package that got here and then file a paypal claim or should I leave it and let it go back to him then claim??

Can't list stuff due to "problem with return option" but when I try to tick the box to allow returns it won't let me.