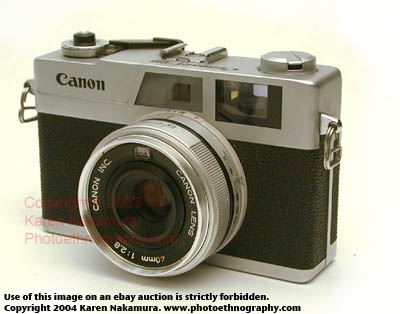 yashica make some good ones as well if you wanted to stick to the brand!
I recently bought one of those, in perfect working condition:

I got this minolta couple weeks ago for a bargain, would like a canonet too, classic steez etc. That's really nice, and yea nothing completes an outfit more than having a vintage camera draped around your neck

luke just get either a yashica t4 or a olympus mju
i don't think i can agree with louyork as i've had mine for years and even taken it travelling across india and it still works.

i know about 6 people who have had to buy new ones or who have alot of problems with them.
its just a hype camera, for the money you could buy something for at least half the price that takes just as good/better photos.

What camera was your nosebleed photo taken with Lou, that looked like the sort of image I want.

I just find the notion of a "hype camera" fucking ridiculous

Why? It is a hype camera, the only reason I know it exists is because Terry Richardson uses it.

it was just taken on my blackberry, but ive got a yashica j2 which i bought for 15 bar, and takes the exact same photos as a t4.
best thing to do is, look on ebay, and if you find a camera you like, then search it on flickr and it will come up with a bunch of photos that people have taken with that camera.

Yeah good shout, I wanna get one to take to Croatia, I'll look for some old, cheap film cams.

That's what I mean, it's ridiculous that internet hipsters are going out and buying specific "vintage" cameras just because a "hype" photographer uses one or because it completes their old skool steez.

i'm pretty new to photography
but i want a camera with better quality than a compact
are d slrs the way to go or is something like this - http://www.crazycameras.co.uk/stub.php?act=showvideo&productId=90013
ideally id like to get onto making nice black and white prints

not a fan of the typical prosumer - I initially went down that road and almost immediately started to want a DSLR and soon after took the plunge.

Depending on what you want it for the DSLR maybe to right option. Alternatively a high end compact, the Leica or a wiser buy would be the micro 4/3rds - this is a market that is likley to expand quite rapidly and will give you the ability to swap lenses. the only problem is it's not very good value for money when you compare it against others, as it's new tech. With the added problem that it's fast developing - there is always going to be a better buy (proly with a good advantage at this stage) around the corner. this is the problem I have at the mo - want to take the plunge now as I need a smaller camera but know there are new things coming soon.

Best bet would be to buy a high end compact or a second hand DSLR. Some bloody good compacts out there. The mid range / prosumers are the same size as a DSLR but a bit of a waste of money (imo)

not the best idea to jump straight into a DSLR if you're new to photography.

cheers mate, any compacts you can recommend which would look good as prints?

Have a look at the Panasonic lumix lx-3. Pricy though.

i do like that lumix but im probably loking for something 200 or under
anyone else got some suggestions?

canon sx200 is around that price, that's a very good camera.

tbh go into a jessops, make sure you tell them you're not looking to buy immeadiatelly and they should set you right.

This may be of some use to someone:

Cheapest in the market…. If you could please add this to all 550d related search terms.

Thank you for your continuing support of the Jessops Programme!