Ridiculous in the sense he would eat a huge pizza with donuts and 3 cans of red bull for lunch. Elite athlete or not that is ridic
BennyB

Could smash that easily mate to be fair. Need that type of food to get the cals in. Couldn't do the reported 12/8000 cals though that would be insane! Last post leg session I stopped at 300g carbs, could have topped off a little more but would have ended up feeling sick then.
RickRude

when he stops competing and becomes a fatty
MuayThaiPimp 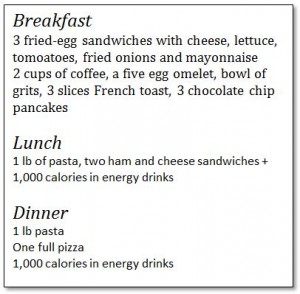 That breakfast alone I'd be fucked for 4 days
MuayThaiPimp

Your hole would fall out…imagine the size of it
joeyjojo

Right I've got 3 weeks. Seems to be going well
I do 3 HIIT classes army bootcamp and circuits at the moment. Eating pretty healthy too max protein and veg and less carbs and sugar. Although fell off the wagon yesterday and drank like 7 pints of Neck Oil at BeaverTown

Anyway, anything drastic I can do in say a week or two weeks to lose maximum belly fat?
MuayThaiPimp

60kg Dumbbells on slight incline for 5 last night, followed by 50kg for 15.

Short term I reckon need to hit 3 sets of 10 at 55kg before having a bash at 60kg for 10. Slowly but surely.
MuayThaiPimp

Cheers. I'll get some videos up soon.

Always been strong on incline DB. My max for 5 reps on incline DB will likely be stronger than my max on flat bench for the same reps. Tendinitis just destroys any consistency in my flat bench training.
Sholto

Figured here is a good place to ask.. Any gjs got any Nike running gear they are looking to shift? Specifically some shorts and a long sleeve top/jacket. Hit me up on tha pm

Sholto wrote: Figured here is a good place to ask.. Any gjs got any Nike running gear they are looking to shift? Specifically some shorts and a long sleeve top/jacket. Hit me up on tha pm

my quads are growing

is raw denim worth it anymore?