Sneakysbest wrote: anyone give me a hand understanding my prescription? Had an eye test as my last pair of glasses were useless. Went to specsavers as they had a free eye test promotion, but the fat cow got proper arsey when I asked for my full prescription, and so the one she's given reads as:

thats literally all thats on there, do I need any other values, and does the fact theres not a CYL or AXIS for my right eye mean its just the same as my left? Or is it incomplete?


Thats a complete prescription, your right eye only has a sphere no cylinder or axis.

She hasn't included your pupillary distance, though almost noone will even if you directly ask for it.

From Apocalypse Now. The small 'box' is interesting. Can I get an ID?

Looking for high quality large gold round frames. My GDCs are cheapo, aren't built or finished that well, perfect shape though.

TIMDOT - they have a look of Dunhill or Rodenstock, or they might be American Optical. All three of those produced glasses in that general style. Try looking on Etsy or vintage eyewear sites.

MLI - do you want completely round? There are loads of companies producing panto shapes at the moment. Panto is just off round, for example the P3 is where the lens is 3mm wider than it is deep. Have a look at Cubitts Bingfield, Garrett Leight Wilson M, Savile Row Round Eye and Panto.

anyone ever had an optician break a pair of their frames after agreeing for them to straighten them "at your own risk"?

Happened to me the other day with a pair of Persol (the optician in question stock Persol) and now it's 40 quid to replace the arm.

Out of principle I don't really want to pay that money but I appreciate that I agreed that it was at my own risk. Has anyone ever managed to get an optician to pay for the new part / frames themselves?

Cheers Andy. These Rodenstocks are the closest I could find:
http://www.rodenstock.com/com/en/eyewear/frameCatalogueDetail?modell=R1409&type=02&gender=all&material=all#

Thanks Andy, you're one of the FUK legends for sure. But no I want completely round. Might look at vintage 90s stuff. Polo etc..

I work at General Eyewear in Camden, we have thousands of vintage NOS frames form late 1800s to '95, so give me a shout if you're after anything specific.

Prices start at £225 with a basic lens, so not budget, but I can do discounts for fukers, especially if you need more than one pair.

We also do handmade frames of our own, and have a bespoke service if you feeling flush.

TIMDOT, we have a few frames like that if you can come in, got loads of perfect circles as well for MLI.

cheers, hope putting all this is above board with rules etc.

My Ma has decided she wants a glasses case for xmas - leather, fairly slim but hard shell. Any recommendations for places to look?

not sure if you're serious Disco

Was watching Lt Col Jim Chartier, USMC storming the gates of hell last night in one of my favorite Iraq invasion docos. Couldn't find a good pic of his glasses, but they are so rad. Have these bi-folding metal arms at the back and he rocks red lenses in the doco. Any ID? 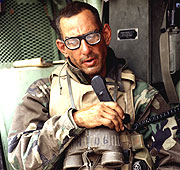 Do Cubitts do discount codes, does anyone know?

No, they don't. The frames are great quality for the price that they are though.

Any opticians in the house? Have optical insurance but my eyes are fine and I've not got a prescription. Quite want to buy some sunnies

My Oliver Peoples frames are starting to go sort of foggy on the outside surfaces. Tried washing it off but only disappears temporarily before returning once they dry. Anyone had this before and is it easy/cheap to fix?

They've had daily wear for 3.5 years now so getting on a bit, but my prescription hasn't changed so would prefer to keep them rather than splash out on new frames.

Some kind of laminate detaching from the acetate?