Toasted wrote: Like the coffee table MIL.
HM ? Or still got the snide one mil ?

Why do you have a Dyson fan mil? Thought you hate european stuff like that?

pops wrote:
Toasted wrote: Like the coffee table MIL.
HM ? Or still got the snide one mil ?
yep, real HM this time. Sold the fakey one about 3 years back for more than I paid new.

I don't consider UK stuff to be European. Even though the UK is technically in Europe it has a different mindset to Europeans and it can fight wars without a) running away and crapping it's pants or b) being evil.

I've always respected UK designers, products and shops. Got a dyson vac too.

You might note I have a swiss watch. There are always exceptions. This one being the British SBS used em while killing Argies on the Falklands, so they're cool. I've always thought the watch is the ultimate universal watch looks and function wise. Plus I'm poor so I like to show off like most poor people.

Saving up now for an EDU and ESUs..loved most HM stuff from the 40s-80s since picking up my first jap interior mag in the late 90s..the played out Eames recliner is too small for me anyway but I'm finding a lot of stuff from then is scaled perfectly to me, high back sofa compact, extra height on the EDU compared to modern desks, love it. Proportions.

After that more Nelson benches, with his shelves and the cushion, for a shoe/utility area in the entry. Then a Nelson bed by Modernica. Then rugs…then?

Took me 2 years from the Sofa compact to the Nelson bench so I'm estimating EDU by 2016!

I had a big Nelson CSS system once, sold it when I fancied something diff. Still got a nice two tone chest of drawers though.

Nice, any pics of your drawers? (no homo)

Looking at getting wood floor in bedrooms/ living room.
Seems to be 15-20mm thick though so against hall tile or landing carpet it would be a fair step up. Anyone else had this? Thinking you would trip over the bar across the doors if it was too high.

footmobile2000 wrote: Nice, any pics of your drawers? (no homo) 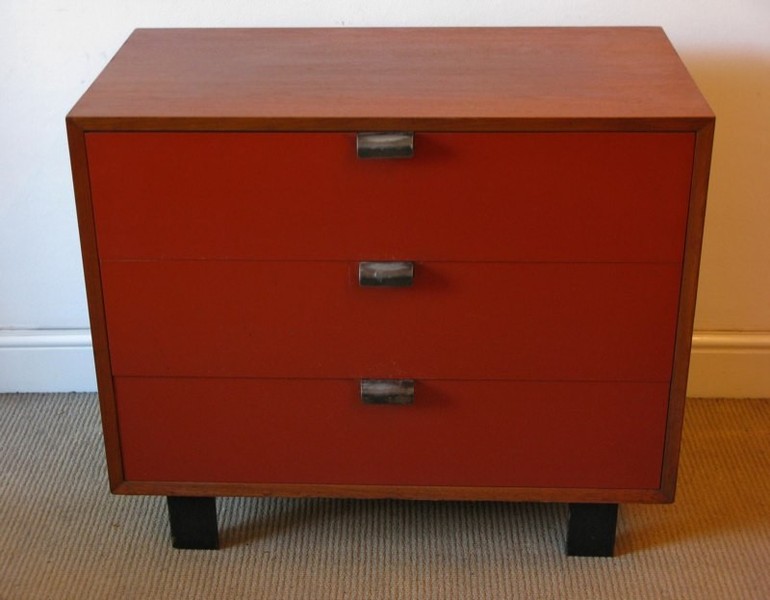 NickMSM wrote: I had a big Nelson CSS system once, sold it when I fancied something diff. Still got a nice two tone chest of drawers though.
White CSS looks great.

Nice collection of Brian Willsher's there. I had SIX of those Robin Day chairs, sold the bloody lot

Prefer the CSS in walnut really.

I'd love a pair of those Day chairs.
Brian willsher lived very close by me so I often have a nose in the charity shops to see if any pop up

Nice NickMSM, that's the thing about vintage stuff, the variety of finishes and colours is greater than what's offered by HM now, but I like the factory fresh feel of newly produced stuff, like I'm not feeling the wear on the metal handles there on yours but I'm really liking the color on the front of the drawers, very Japanese laquerwear, 80s issue?…if the handles were reblacked it would be perfect imo

Pops, you're such a sprockets kind of guy..CSS in wood is waaay better, otherwise whats the point? You might as well just have that Euro-avant guard stuff you have. I'll stick to everyday furniture in an everyday American kinda way!

All about the patina for me, stuff just doesn't look as good when it's shiny etc. Each to their own though

That's why I shine my Goro's

A few eames bits in classifieds

Can anyone point me in the direction of any cheap single barcelona shape chairs. I need a couple to fill space in my bedroom. I actually don't have a jar of glue where to start looking.

Anyone know of a good matt finish handle-less kitchen, looking for a couple of units in white/off white (floor to ceiling integrated FF and only a couple of base units) as well as a good roller door system to custom build a half depth wall unit?

Any good product sites for inspiration?