The Day Shall Come was poor by Chris Morris' high standards. Not all the jokes come off, making you realise how spoilt you are by films like In The Loop and The Death of Stalin. It's worth a watch though, funny bits and a really interesting topic.

Late Spring by Ozu at the BFI, what a cracking director. Every film of his is fantastic.


Going to see it tonight with a Q&A with Morris at Hackney Picturehouse. Did hear it wasn't great but Chris Morris is a legend so I'm still keen to see what he says about it.

TCB wrote: Going to see it tonight with a Q&A with Morris at Hackney Picturehouse. Did hear it wasn't great but Chris Morris is a legend so I'm still keen to see what he says about it.
Not great is probably the best way to describe it, but it's difficult to balance saying something like that without putting people off from going to see it. Definitely worth a watch, especially with a Q&A.

How was it, TCB? Morris is class - shame the initial reviews aren't glowing.

I actually quite liked it although it just wasn’t that funny despite being a comedy. The story and acting were excellent and there were some absolute corking lines but far too many jokes fell flat. No way near as good as Four Lions.

The Q&A made it a lot better as CM went into a lot of detail as to how he came up with the idea, the research he conducted etc. A properly cringe inducing moment came when an audience member said he was a huge fan of his work but he really didn’t like the film and felt it was a watered down, Americanised version in comparison to his previous work. Couldn’t fault that opinion tbf. Morris took it well though, to the point of goading the audience member on and gave the intelligent response you would expect. Facts are facts though, it just wasn’t nearly as funny or incendiary as you’d expect or would hope it to be.

Only just got around to watching Lawless (Shia, Hardy) … fucking awesome movie.

Peanut Butter Falcon was so good. Take the missus

Corrr, saw The Lighthouse last night, that's one to check out.

David Copperfield (new Armando Ianucci). Properly great. Not as funny as The Death of Stalin but very charming, ridiculous quality cast and incredibly witty. The man really is the king.

Atlantics as well, which this year became the first film at Cannes to be directed by a black woman. Really interesting and inventive, and a great argument for not watching a trailer or reading about a film before you see it.

Tonight I'm seeing the surprise film that is closing the Cambridge Film Festival. Let's just say I have a pretty good idea of what it is and I'll report back. Late night tonight for me.

Looking forward to 'The King' next week on Netflix.

illmurray wrote: Corrr, saw The Lighthouse last night, that's one to check out.

Plus the Miles Davis documentary which is pretty standard BBC four style doc making but great nonetheless.
That the nutty Willem Defoe one? Looked spicy in the trailer

Bait last night at the watershed in bristol

Best film of the year for me

You wouldn't get it.

I read somewhere that apparently in Joker, all the clocks in the background show the same time in every scene, suggesting the whole film is in his head…

fudge.dredd wrote: I read somewhere that apparently in Joker, all the clocks in the background show the same time in every scene, suggesting the whole film is in his head…
No, after the asylum scene the clock is 13, 9 at the subway scene.

Edit: it was 11:11 in certain scenes… maybe coincidence but maybe not… 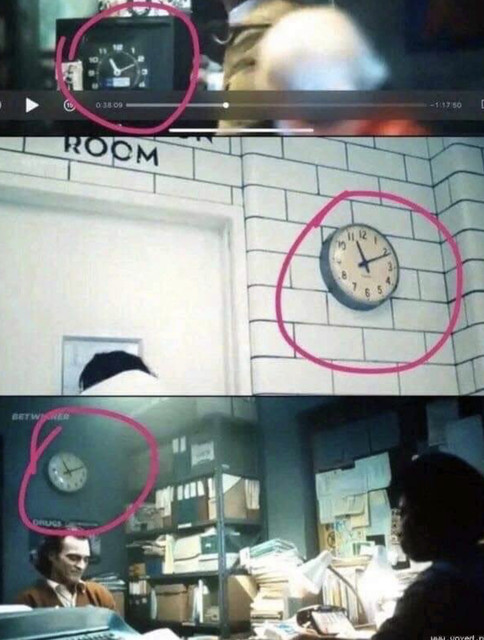