Are you sure you're not me? I've carried all kinds of weird shit across cities using the overload panel on the main pack of the SPEAR, a microwave, flattened moving boxes, a vaccuum cleaner.

I use the assault pack for overnight hikes. Paracord a sleeping roll to the outside (overload panel just adds weight and bulk), sleeping bag and bivy in a compression pack internally at the base, food and water over that. MOLLE pouches on the belt for beef jerkey, cigars and water. Cigars in US Navy waterproof ziplock bags

yeah the 500d cordura is why the SEALs rejected it basically (that and strap management?). It weighs a lot just by itself and when you're on a LRRP for two weeks every gram counts..if you look like the dude in the manual though, I don't think you'd care?

Talk to me about packs with overload capability that don't cost 700 bucks.

Seems perfect for carrying crates of 1664 at festivals.

Need more intel - Do you plan on going prone or taking a knee at any point?

Don't know why I'm calling the secondary SPEAR pack an assault pack? It's the patrol pack.

FrIEND wrote: Need more intel - Do you plan on going prone or taking a knee at any point?
I won't be seeing much combat. It's more of a logistics role. Routing for antennae would be a bonus though. 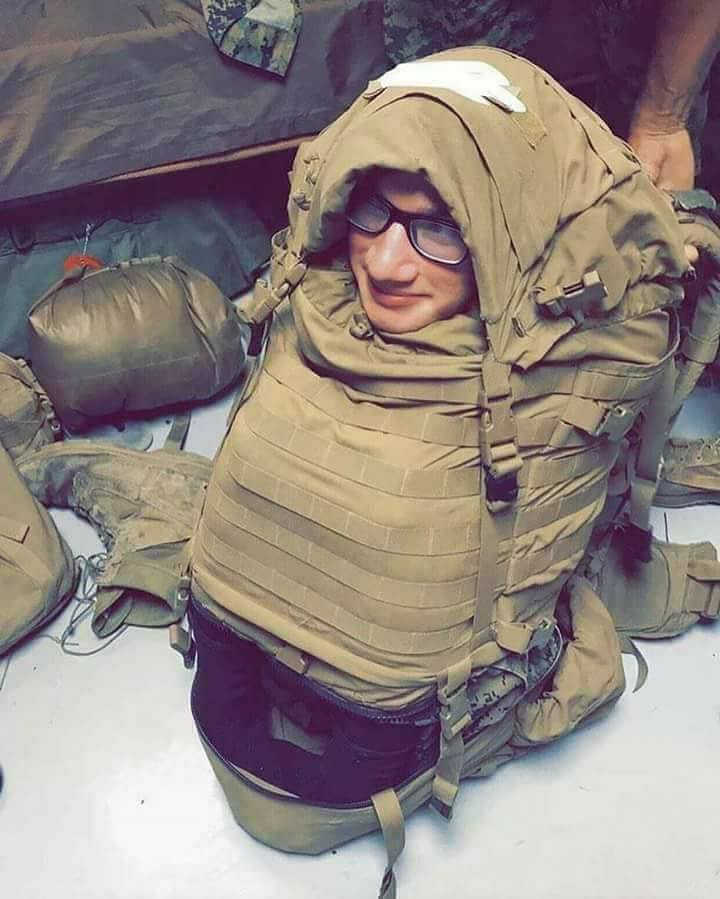 I like this brand called Goofy Creation. too bad it's all "one size fits all", would like to size up on a lot their stuff: what's this supposed to be used for? dopp kit?

ChicagoJoe it's for a Sony VAIO C1XE. The DISK CHAMBER readypack is also specifically designed to hold a Sony DE-01 discman. Tet and associates all thought Sony was cool at the time. Tet's desk had a full Sony suite, Clie, C1XE, etc etc

Sony were really killing the hardware game until the iPod came out.

Some Vaio laptops from the late 90s wouldn't look out of place today.

Very cool. I had a de-01 and it was so cool with the disk chamber . So many little touches like the holes to access the eject/charge functions and slot for the external battery. Too bad it broke : (

yeah cool, I've got two DE-01s, both working. And two disk chambers. Sometimes I load up other, better sounding discmen (with no G-protection compression problems) into em though, just have to remove to change discs.

illwill - yeah Hiroshi was Japan's best known Apple early adopter and he compares Apple and Sony in the above article, he still mixes the two brands and endorses stuff like Sony high end headphones and other gadgets in magazines. He endorses Beats by Dre tho as well

Yeah it's prolly real, the usual detachment reconnaisance tag has either been replaced by the owner with the transform Nam '64 or it was one of the considerable number of random variations that came out. Looks like a toggle has been self replaced on one of the zip cords by the owner too. I think it's a pretty cool mod actually, always liked that transform tag and wished it wasn't on the inside of my pants…

Size Medium? Don't pay attention. Actually I don't even look at taps listings anymore, retired it all except jackets and readypack. I can't believe I'm saying that but I gave up trying to find enough decent condition cut n sew from the era I love. Stuff now just sucks shit

Did I say that? Nah I can NEVER give up w)taps. sides the Polo I wear for work is basically taps trad gear's influence from the seasons and pieces I like.

It's back to w)taps base with Masterpiece support.

Looking to do a big eyewear reissue, think slinky optics in a variety of styles..