Haydn wrote: Im in the process of arranging a mortgage at the moment, everyones saying that i should get on the ladder as soon as really, im looking for it as a long term thing.

My current housemate, who also likes to think he's my financial advisor tells me i shouldnt be buying at this time.

I've looked into it and on the south coast, house prices have dropped by roughly 2% each month over the last few months, however, the way i see it, im going in for the long run, so if there is a recession, i should be ok right?


It depends if you have any money saved up and can afford the risk of a crash or can afford to buy when property is cheaper (it'll always pick up in value). Since the Northern Rock fiasco the days of 125% loans to first-time buyers are gone.

Over 25 years property will generally rise in price and make a good return - you may find you cannot afford to pay your mtg with inflation on cost of living and interest rate rises though! You cant say wether its a good time to buy unless you know the persons current situation.

If you live at home or can rent cheaply stay as you are and save as much as possible - you will get a better interest rate on any home loan in future and will be in position to take advantage of any 'crash'.

crackajack wrote: Over 25 years property will generally rise in price and make a good return
id love to see a property that hasnt risen in value MASSIVELY in the last twenty five years i really would…could you show us any that havent risen or have lost, hence you using the word 'generally'?

I've been renting a room from friends for the past 2 years, paying less than average rent for the area. I'm just sick of living in this area and want to move closer to work and where most of my friends live. Rather than pissing money down the drain in rent again i guess i see it as a good time to buy, even though not many others are at the moment.

Im looking for a 3 bedroom place so i will let 2 of the rooms, with this i'll be able to afford the repayments, however im not banking on letting the rooms immediately as work might need doing and they might take a while to let.

This might sound like a dumb question, but if interest rates explode along with the cost of living, will the cost of renting rise also?

People charge rent to pay their mortgage, if the mortgage costs more then the rent has to go up to cover it. In general renting costs less than a mortgage, either due to the owner putting more deposit down on a new buy, or the property being old and the mortgage was of a smaller value than the actual value now.

Noble Locks wrote:
crackajack wrote: Over 25 years property will generally rise in price and make a good return
id love to see a property that hasnt risen in value MASSIVELY in the last twenty five years i really would…could you show us any that havent risen or have lost, hence you using the word 'generally'? 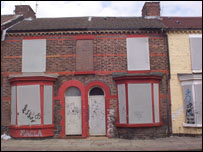 Well it depends - the people who bought these houses in areas of manchester, liverpool, oldham etc 25 years ago arent smiling now

But im being pedantic, I just wanted to make the point that your house value can go up and down - you may be in -ve equity for 10 years then see a rise. Or you may sell your house for more than you bought it but due to interest payments still lose money!

Saw quite a nice house today, and spoke to a mortgage advisor (estate agent). He wasn't the first mortgage advisor i have spoke to, but i was quite curious on the advise that he had given me.

He was aware of the houses that i was going to be looking at, and i asked him what sort of offers could i make on todays market. He replied saying that a lot of sellers are willing to take offers of 10% lower than the price that they are selling at.

Surely its things like this that can cause slow downs in the market? A few of the houses that i viewed today had been up for about 3 months, it doesn't seem surprising if estate agencies are telling people that they can get 10% off.

thats the norm mate, always has been…its very very rare that you ever pay the full asking

Always knew that people made offers, i just thought it was off that i was advised to make ridiculous offers like that.

nothings selling mate, its the worst time in the housing market since you have been alive.
he was doing you a favour by trying to save you money, cos most people selling now will have been selling for ages and would more than likely take a 10% hit on any sale (from a one bed flat for 150k to a mansion at 1.5mill), and he fully knows that and shared that knowledge with a young and inexperienced buyer cos his firm needs the sale as bad as the vendor.

yeah what noble says is spot on. Id say 10% lower offers were pretty common place in a normal situation, but in the current market you could easily offer lower and have it accepted if you find the right house / people.

Looked at a new place yesterday as well, which was well over my budget. Told the representative there my budget and he basically cut 20% off the asking price without me even offering a holding fee.

With 20k savings and a wage of 25K a year what sort of mortgage could you get?

Haydn wrote: Always knew that people made offers, i just thought it was off that i was advised to make ridiculous offers like that.
My financial advisor told me the same 3 years ago when the market was still rising. You go in with a low ball offer which they won't accept and they counter offer. I got 5% off mine.

What is the best way to get a mortgage? Using a financial advisor or going straight to a bank?

Reason i ask is that a financial advisor some friends and collegues use has got back to me with a mortgage with Lloyds, its 6.69% interest only for 2 years, with fees of £1995. They claim they search the whole market, and that they don't charge a fee.

I walked into Natwest the other day and told them my circumstances, and the best deal they could find me was 5.99% interest only for two years with fees of £999.

I would have thought the financial advisor would have found this mortgage product. Has anyone on here got a mortgage with Natwest or Lloyds? Natwest is looking the most attractive at the moment as the repayments are about £150 less.

the bank were extremely helpful and went through all of their products with me to (seemingly) genuinely find the best product for me. I'm self-employed so over the year the money I save to pay my tax (a few grand) is building up but essentially useless to me, so an offset mortgage makes perfect sense. The woman at the bank compared it to their nearest mortgage and we found that over the course of the mortgage's life I would be thousands of pounds better off with an offset

when I saw the independent mortgage adviser he seemed to be pushing a couple of particular mortgages, and when I asked him about offset mortgages he said "they're no use for you, you have to have savings of 50 grand plus to make it worthwhile"

Thats what i thought, immediately when i saw the high fees for the mortgage with Lloyds, i imagined that is the reason why they recommended it.

Its funny looking at the Lloyds site, that their highest fee is £895.