Menswear: Pics From Other Fashion Forums. Whether They Are Great, Terrible Or Awful.

Starting to come to the conclusion that you're a bit of a retard Astro.
MuayThaiPimp

Peregrine wrote: Starting to come to the conclusion that you're a bit of a retard Astro.
how come?
zoom

IMO Soloist requires a whole specific look about it, a few pieces here and there wont work. Prove me wrong astro,
San

He likes the item so I wouldn't call him a retard in that sense.
It takes years sometimes and loads of mistakes/££££'s spent to figure out what suits you and what you like, well it did for me.
He's just buying everything atm but over time he'll narrow it done to certain styles.
Nick.

Astro why the fuck would you get into soloist gear? checked it all out in dsm yesterday and I have to say it's quite impressive irl but fuck me the pricing is ridiculous.
Hello World

What i would do is fine an item I like the look of, then spend 10% of the value on magazines, look books and research to work out if that style is for me, then work out what a whole look is going to cost.

Try to make the whole thing for £150 with no brands, then buy expensive single items to up rate the outfit

Even the outfits I wear casually are generally £1000+ if you are talking shoes + coat, but that has taken 3 / 4 years of concentrating on a fixed style to get all the items.
rural

zoom wrote: IMO Soloist requires a whole specific look about it, a few pieces here and there wont work. Prove me wrong astro,
Not always true, have seen a few JP blogs where there is just the odd piece mixed in (usually layered tee's sweats) with other brands/looks and it works. It's just some of the more standout pieces that need to be worn in context. IMO

Though i don't think soloist would be right for astroboy considering it's price and what i've seen him wear so far.
DY

Which I had the money at uni to buy soloist

To be fair to him, what he posted is hardly that "out there"
Copper

Fuck me Vukmirovic has been on the roids 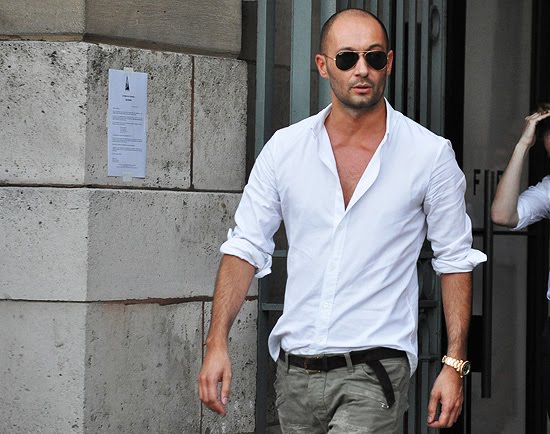 Looked good before he did a Timberland
doug.

doomedyouth wrote: Which I had the money at uni to buy soloist

What I was thinking!
inversesquare

doomedyouth wrote: Which I had the money at uni to buy soloist

It's taken you until your thirties but you've made up for it now.
snaye

I though he was wearing one of those Thom Browne munster cardis from a few years back at first.

looked a million miles better before. on a side note, a good fitting white shirt always looks