All of those things you listed are right-wing buzz-words that a couple of years ago would have just been phrased as 'PC gone mad'.

Ironically, it's a culture war import from the states, couple of doors down from going on about 'cultural marxism'.
Rez

To get away from culture war shit for a bit - when you say 'socially conservative', you've got to ask yourself - will labour ever get this woman's vote by being a bit more racist, or open to her racist views, or will she always vote for the most authentically racist option?

Don’t ever tell me I’m “not English”. pic.twitter.com/pODPhOJw8W

But that lady is a racist. LBC screen to get nutters on, that’s their shtick.

Honestly this is making my point - the narcissist twitter grifter crew want to paint everyone who’s skeptical of their ideology as racist, it’s in their interest. Fortunately the reality is most people aren’t racists, equally most people aren’t suffering from pathological problems required to buy into the grifters’ ideas either. The best thing Labour could do is do ban the membership from social media.
Rez

No nobody is talking about 'critical race theory' except the right, literally no one, it is a tiny academic field that has likely never been uttered by anyone in the UK outside of academia.

You have been utterly defrauded by the right wing papers I'm afraid!

If you think going on about things being 'woke' isn't just a huge dog whistle, you have been taken for a mug!

Rez wrote: To get away from culture war shit for a bit - when you say 'socially conservative', you've got to ask yourself - will labour ever get this woman's vote by being a bit more racist, or open to her racist views, or will she always vote for the most authentically racist option?

Don’t ever tell me I’m “not English”. pic.twitter.com/pODPhOJw8W

Rez wrote: No nobody is talking about 'critical race theory' except the right, literally no one, it is a tiny academic field that has likely never been uttered by anyone in the UK outside of academia.

You have been utterly defrauded by the right wing papers I'm afraid!

If you think going on about things being 'woke' isn't just a huge dog whistle, you have been taken for a mug!
It doesn't really matter what label is used, whether you call it 'Critical Race Theory', 'Woke', 'IdPol' or whether or not The Graun tries to put a positive spin on it or not.

And god knows what rock you were living under last year if you didn't see any of the discourse around 'White Privilege', 'Unconcious Bias', 'Defund the Police', 'Robin D'angelo's White Fragility', 'Ibram X. Kendi's Anti-Racism', 'Cancel-Culture'… All of which are part of a particular school of thought which a lot of people will group together as 'Woke'.

Being sceptical of that school of thought is not a 'dog whistle'. The majority of people, including the majority of ethnic minority people, want to emphasise universal human aspects of life that unite us rather than raise the salience of racial divisions to create conflict - especially given that all progress towards racial equality ever has been born of seeing commonalities.

Most people are not racist, most people want to progress towards a world where race is as inconsequential to someone's ability to achieve their potential as their eye colour or hair colour. It's hardly surprising then that most people are suspicious of a school of thought that gives absolute primacy to racial identity and seeks to sow division between racial groups for the benefit of a small group of self-interested grifters.

It's not just a race thing either, it happened when the woke Twitter ghouls descended on the murdered woman in South London before her body was even found to ensure that her death could score them points on Twitter by making infographics about patriarchy. Unfortunately, the grifters have a massive amount of power within Labour's activist base - and until they manage to expel them Labour are fucked, unfortunately.

To help you understand what I'm getting at, You know how Tommy Robinson turns up at whatever terrorist tragedy occurs and uses it to advance his own political agenda? - That's how most people feel about 'woke' when they do the same thing but for their own warped ideology.
Rez

Pointing out that a woman being abducted on her way home late at night is indicative of a misogynist society is…kind of right though?

And Tommy Robinson stoking fear and racism when there's a terror attack or whatever is…bad and wrong?

But from what you've said not sure why you'd be drawing a moral equivalence, tacking to the centre like this, seems like a dead end to me.
Rez

Also if labels don't matter, then please let's call it 'PC gone mad' because if you're just going to collapse several strains of academic thought/co-opted aave slang into things you've seen on twitter that you don't like, it could at least have a fun name!

On a final note, there has been so much chat and assumptions about 'real' people, I would recommend reading this book on the cultural side of it:

Can you explain why that make society misogynistic?
Is it because a man killed a woman?
Are men or women murdered more?

Your week off or summat Rez? If it's not, have you tried taking one?
Rez

Hi Chris, I reckon it's worth focusing on her being abducted while walking home at night, then killed, not to mention the fact that the alleged had exposed himself in public days prior…

Then think about how many women experience this type of violence/harassment/abuse, particularly from men or groups of men, often sexual in nature.

Mate I’m not making a moral equivalence - I’m just expanding on the point which you seemed to take personally, that Labour have an activist base who’s interest is in chasing social media clout rather than representing mainstream Britain.

I don’t think the average mass traditional labour voter is a bigot, and calling them that because they don’t agree with nebulous ideological concepts that paint them as misogynistic racists because they actually quite like Winston Churchill or think the solution to sexual assault is harsher sentencing rather than reflecting on patriarchy is likely to make them less inclined to vote labour.

Once they drop all the idpol winning is easy - whack in another marginal 45% tax band starting at £80k and spend the money on nurses, police officers, and teachers.

Right now they should be skewering the Tories on selling PPE to China, framing it as unpatriotic and unfair, instead they’re trying to control their activist contingent who are associating with and raising the salience of protests/riots that are deeply unpopular with mainstream people.

During BLM they could’ve say - made a push to increase and better enforce the minimum wage - which minorities disproportionately rely on, tailoring the moment to British issues - instead we got ludicrous attempts to try and launch defund the police as a legitimate idea here.

Post Sarah Everett vigil we could have had an policy proposal to make all sexual offences immediately put perverts on a list - instead it was ‘Yes All Men’.

Point I’m trying to convey here is that at every juncture the activist minority drags the discussion to the most polarising place, which is always unpalatable for the mainstream voter - their incentive is social media popularity for them so of course they want division as that’s how the algorithms work there - the issue is that in chasing the clout they create the worst possible optics for Labour.
Rez

'I don’t think the average mass traditional labour voter is a bigot' good, I haven't said that either? I think that labour is and will continue to try being performatively conservative in order to win back an electorate they feel that they can't persuade, so must become more bigoted to appeal to.

Just that labour is now on a rightward tack culturally and economically, which will be closer to new labour but much more unpopular in the current climate.

This is to try and recapture the 'red wall' (concept only invented in 2019) to draw back the voters they lost on their Brexit policy and the support they bled from press demonisation on 17-19), not to mention voter erosion which has been happening in those areas for 30+ years.

They could be putting forward lots of transformative policies, but won't, because the strategy is to coast into power on Tory incompetence and hoping the press won't monster them when it comes to election time (false).

I really do think you are pinning the failures of labour (currently polling at the same point as they did in Dec 2019) on a group of Twitter people you don't like…who have mostly left the party?

I’m still struggling here. Are some forms of crime worse than others? Even if it occurs less frequently? For example, you’re focusing on walking home at night/abducted/killed (obviously horrendous), but what about the other murders? Why are they not just as important and need to highlight unacceptable behaviour in society?

The separate point you raise about laddy behaviour is also obviously unacceptable and should be discouraged. But again why the particular focus on that? Men get into more fights with men, women bully women psychologically. Both sexes can act reprehensibly, so why does it make it a misogynistic society?
inversesquare

I'd probably ask some women what they think about their treatment by society rather than some men on a fashion forum.
-DiscoTits-

FYI Labour will never get in power while Scotland continues to vote SNP. No matter which leader is in charge down south SNP have so much grip in Scottish politics and the pendulum has swung and stuck towards independence sooner rather than later.
Rez

Absolutely, same the for proposed boundary changes down south.

It's why triangulating and trying to be more like the Tories is a dead end. Milliband already tried it.
andymakesglasses

YLAup wrote: Your week off or summat Rez? If it's not, have you tried taking one? 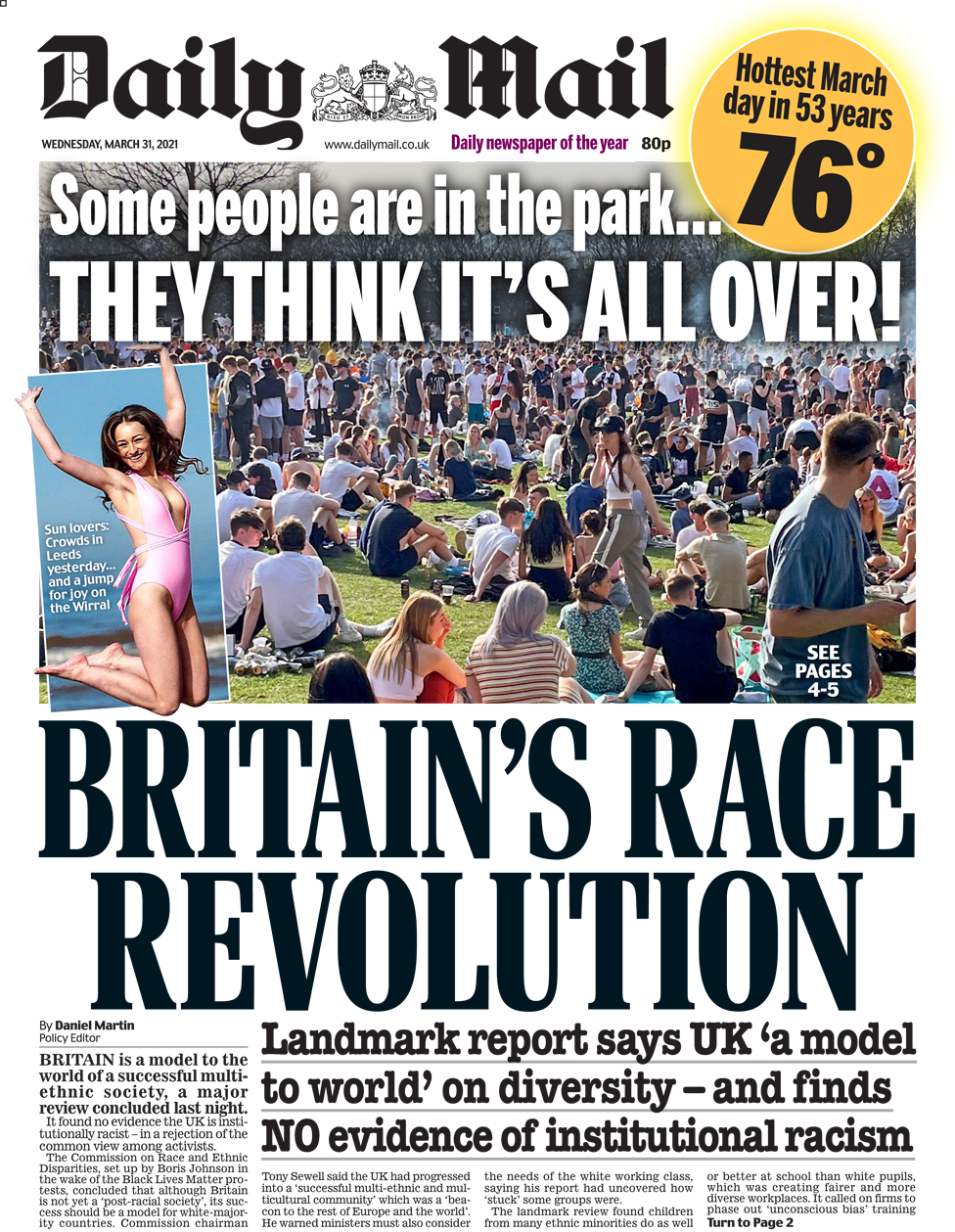 Fahrenheit used on the front page of the mail today