Does anyone think there’s any extra emphasis on the case because the accused guys are Israeli?

Just putting it out there, as a few people that I’ve chatted with about it have just casually said “they were Jewish, right?”…

Not sure what anyone makes of that and/or why it would be relevant?

Edit: I know ‘Israeli doesn't always mean ’Jewish’ but people do tend to conflate the two - I was called out on it in another thread before, although I was aware of what I was trying to say.

FFS.. reports are breaking out of Iran attacking US based military in Iraq with missiles!

All those comments about Iran not doing shit have aged really well. MAGA etc /s

Iran can’t and won’t do anything that can remotely affect the USA.

Don’t believe everything you see/read: 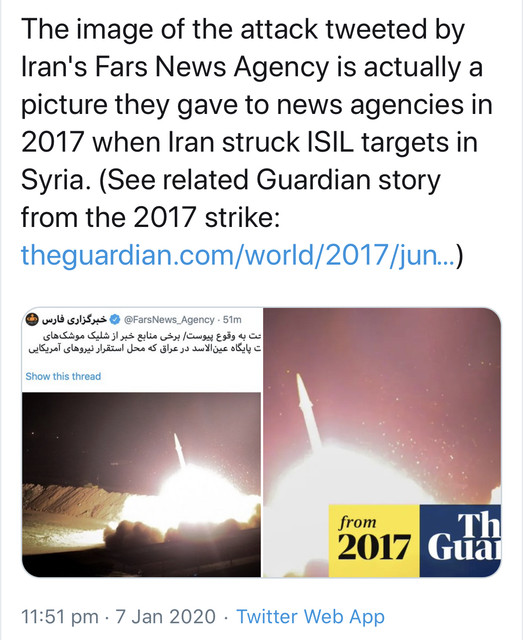 Fudge. Since when did you become an expert in Middle East conflict? Just asking for a mate?

Since when did any of you ? Asking for similar friend.

You all jump on the bandwagon with Amazon fires, Australia, climate change, Thunberg, Iran, Trump, etc.

I’m doing the same but with an opposing view.

Iran will (if anything) fire a few non-rockets, zero deaths, and they’ll lie on their state television that they’ve killed some Americans and chant their favourite “death to America” to save face.

I actually agree with you that they are doing something to be seen to be doing something. The question is will it de-escalate after that or will Donny pull a shit covered rabbit out of the hat that will keep the cycle going. Iran aren’t the wild card here. They’ll make some noise but it will be interesting if they turn their hackers loose on anything.

These are interesting takes on it

fudge.dredd wrote: You all jump on the bandwagon with Amazon fires, Australia, climate change, Thunberg, Iran, Trump, etc.
You made a fucking thread for Greta.

But is it not also true that they’ve been zero casualties over this attack? That means no escalation. This was a ceremonial attack using primitive missiles and a lot of misinformation came out of Iran with them using old photos to show they meant business.

Trump’s strategy worked - they blinked first and due to the way QS was killed (not ‘assassinated’ like the media are now reporting) they fear any reprisals so they actually went out of their way not to genuinely launch any major attacks.

krisricey wrote:
fudge.dredd wrote: You all jump on the bandwagon with Amazon fires, Australia, climate change, Thunberg, Iran, Trump, etc.
You made a fucking thread for Greta.

Speaking of crazy motherfuckers, Carlos Ghosn must have pulled some Jason Bourne shit to get out of Japan.

JUST IN: Iraq received "an official verbal message" from Iran before the missile attacks, according to a statement from Iraqi Prime Minister Adil Abdul Mahdi https://t.co/Hanrek0j0U

fudge.dredd wrote: Iran will (if anything) fire a few non-rockets, zero deaths, and they’ll lie on their state television that they’ve killed some Americans and chant their favourite “death to America” to save face.
This sounds about right then I think - apart from them possibly shooting down that Ukrainian plane and killing some of their own…

That was basically the only plausible scenario, anything else would have been suicide. So, congratulations?

The plane could also have been shot down by the US by mistake.