RVP10 wrote:
Areo wrote: Picked up a pair of Vans Vault black leather slip-ons for £18 (75% off). Will post in last purchases later.
can anyone pick me up a pair in a 10?
There wasn't any left when I went this evening. Clothing has mainly been raped and no fragrances either when I asked. Still worth popping down though.
DY

Picked up a sunsea jumper and some scents

Soloist items weren't very nice. Sorry to everyone who wanted stuff but it wasn't very good.

Guess it's luck of the draw, I'm in two minds to take the missus tomorrow
beedub

Which Sunsea jumper? One of the layered ones? Did they have many?
Foxtrot

i picked up a damir doma long sleeve
there were a few nice things not much though. saw the guidi slip ons, soloist shirt which wasnt very nice, visvim x sophnet trainers which were quite nice and few casely hayford knits. it wasnt great, dont think ill go back. all the aftershaves sold out too.
atlas

Not worth going down unless you're an S

DSM was alright in the mornings, got raped very quickly, but picked up a pair of Yuketens for £140. Seemed to be replenishing stock constantly so if you're nearby I'd go down for a wander.
rural

APC was defiantly a let down, got at 4 after over 2 hours queing. Even as a small was fuck all to pick from. Decent amount of footwear in a 9. Shivering even inside as they make you hand over your jacket.
toof_ake

Anyone know if APC will get restocked for tomorrow? Went down today, as above, not much going on at all. If you want jeans and you aren't a 26 or 38 waist then forget it.
rural

Most of these sample sales make you do that, so you can't nick stuff and hide it in your coat.
timmbo

anyone been again - any restocks (gosha in particular)?
Rez

Went today. Best thing I saw was some soloist tracky bottoms and some soph x Vis plaintoes in size 9 that one of the staff members was trying to hide behind a load of boxes

Honestly amazing how much crap cdg has pumped out over the years. Any blackmeans stuff was completely unwearable. Trainers were mostly shit too.
menace

APC was awful, about ten mens things which weren't XS and their XLs fit quite small anyway. Froze for 3 hours for fuck all
Maguire 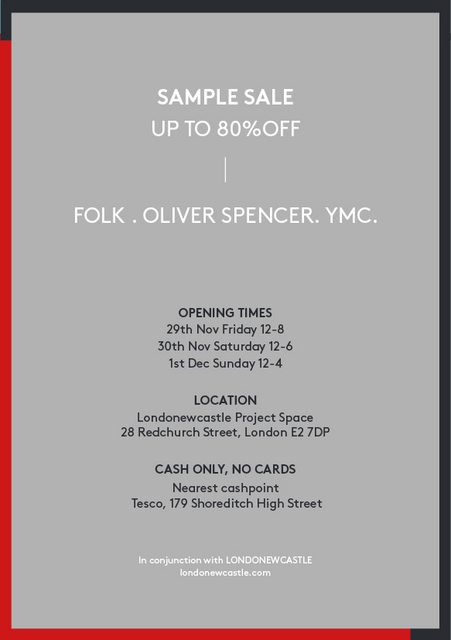 Robadob wrote: That was 3 hours of my life I'll never get back…
peak times rob
paint.ldn

OC this Thursday-Sunday down at Truman
Owlix