Would be it possible for a cobbler to take off the sole of some DMs and put on a crepe or leather sole ? 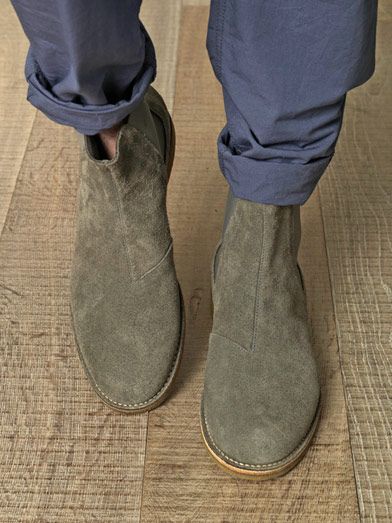 menace wrote: Would be it possible for a cobbler to take off the sole of some DMs and put on a crepe or leather sole ?
No cobblers will touch a DM I think.

its hard to say really. sizing seems to be a little sporadic. but generally its seems people either go true or size up. best advice is to try a pair irl before you buy.
i sized up one. mine are the reverse horse back zips model 986. they fit really tight at first but after a few wears, they literally feel like slippers buy far the comfiest footwear i own.

^ yeah that's the general consensus I've seen around.. Lol I thought you wrote "after a few years.." Had to read that twice!

Just need to find some stockists now.. Thanks

Diemme for me at the minute, just grabbed the Colac model in Cognac as was beginning to get bored with Roccia vet.
Well made boots, far superior to Fracap and a nice alternative to the like of Danner.

What's a good sand/stone coloured suede boot/desert boot (not too clunky) that's above Clarks, but not heading into the Alden/Visvim pricing. APC?

Personally I think if you want a desert boot, why go anywhere but Clarks? The quality you get for the price can't be bested IMO..

Edit: point in case - in the second link above, that APC desert boot is identical to a Clarks. But triple the price???

Cheers guys. Is US the only place to get them?

Mr Porter had them last season, expect they will probably have them this season too?

What's the sizing like on Alden, in particular the long wing blucher?

General rule is to size down a half, I sized down 1 though.

I would suggest you take a trip to Browns to try them on mate, that's what I did (Amin's advise) and it paid off.