Im considering getting my RW chukkas resoled and remember seeing timpsons do UK resoling for RW
anyone had any experience with this or am i better going to a good independent place?
Rirawin

Padawan got his Visvim Virgil's done via Timpsons, but involved them sending the pair off to their head office. £60 inc the Cristy soles I think he quoted.

I decided to source my Vibram soles separately and have found a Shoe Care (http://www.shoecare.co.uk/) branch locally to do the resoling for £15 (would've charged £60 otherwise and used their own Vibram soles, the style of which were pretty undesirable).

While Shoe Care are probably like Timpsons, their outlets around the UK are listed as Premium Shoe Makers for Vibram by VIbram themselves, so they must have some sort of standard.

Having said that, if I was going for a new leather midsole and/or new welt, I'd send mine off to Shoe Healer (https://www.shoehealer.co.uk/), which I believe Dee has used before for his resoling jobs. That's a bigger job and worth the £65 (excluding cost of soles).
bruk

Thanks Rirawin… i think Shoe Healer is going to be the best option as i'll most likely want them re-welted and i know they'll do a thorough job.

If the leather welt isn't damaged it's worth just getting them resoled and putting off a re-welt as long as possible. I say this as there's a limited amount of times you can re-welt a shoe, I've read it's as few as 3-4 times even if you send them off to the manufacturer where they'd have the original last.

Also the majority of boot makers that use Vibram soles (Visvim and Red Wing included), the soles themselves are glued on and not stitched through the sole to the welt, especially if they're a Cristy (4014) sole as they have no grooves for the stitching. I've only seen stitched Vibram soles (132, 1136 etc.) on a few Vibergs, Wolverines, or where owners who have specially requested it from the cobbler and thus paid more for it.

Then again, you could argue as to how long the leather upper will last, and if you're re-welting every couple of years, you might want to bin the boots after a decade in service…
bruk

Bruk can't remember where you are but there's a redwing shop just off carnaby street now, they send them off and clean them up for you as well
Rirawin

Fair enough. I just didn't want you spending more money than you needed to

Here's an example of a pair of Red Wings resoled, as you can see the Vibram sole is stitched to the welt 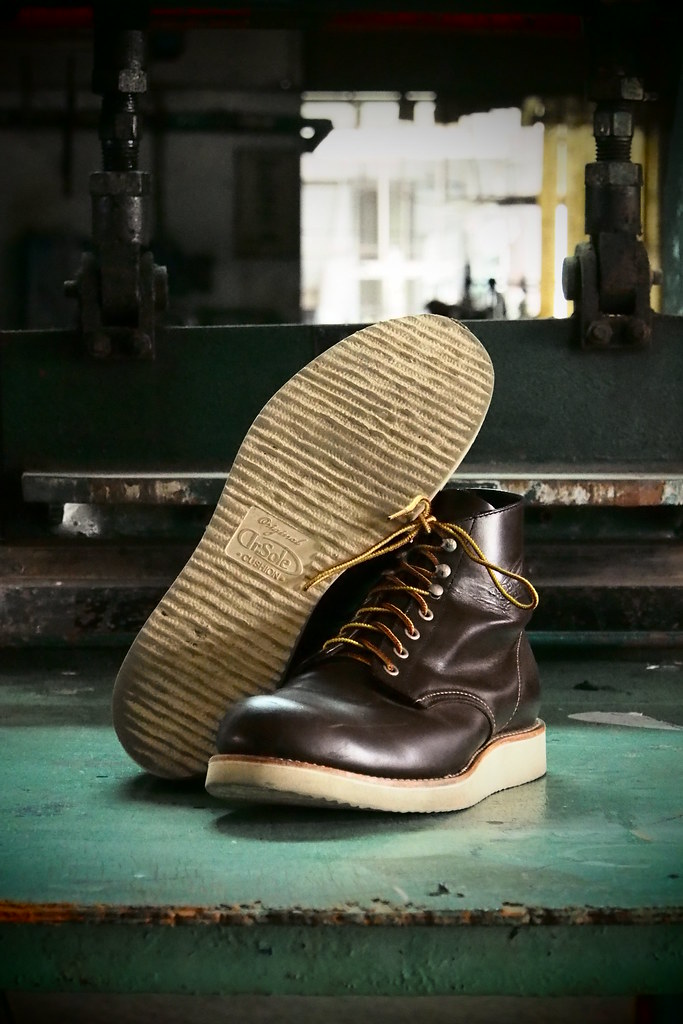 (both photos shamelessly stolen from http://supertalk.superfuture.com/index.php/topic/152355-customresoled-boots/)

As you can see top pair have the soles stitched through to the welt, while the bottom pair are just glued. With the latter they just peel off the old Vibram sole, clean off the bottom of the leather welt, then glue on a new Vibram sole and sand/trim the sole down to size/shape.
Fatbob

bruk wrote: Im considering getting my RW chukkas resoled and remember seeing timpsons do UK resoling for RW
anyone had any experience with this or am i better going to a good independent place?
I got a pair of RW resoled with vibram through Timpsons a few years ago. Did a perfectly good job, although wasn't exactly cheap. In fact it cost more than the boots originally did!
Noble Locks

All this bother for red wings is a bit meh when they are on sale for 95 quid in the discounts thread. And dont bother me with the 'but these have worn in nice after years'. Just start a fucking gain and get the new ones to wear in nicely.
figurine

My moc toes destroyed my feet for the first 3 months or so that I wore them, ridiculously comfy now but there's no way I'd want to go through that all over again.
bruk

My RW's are like slippers, leather inners moulded to my foot shape and round the ankles, probably comfiest pair of shoes i got so if i can get a resole and another 6 years wear then course i'm going to do that..
I've somehow missed out on all the cheap RW's this sale time (either skint after buying other stuff or not in my size) but i'm in the market for another pair aswell as a resole
phikz

Do look comfy, thought they'd have more colours running through the leather though. Look forward to when mine break.
bruk

They need a good clean up and buff, not been done since start of december
that would probably bring the character in the leather out a bit better
saying that RW always seem to look better beat up
Dee

isn't there sometimes a midsole to vibrams that are stitched through with the welt then the main sole glued to the mid?

there was a video which documented the process somewhere, maybe in the redwing thread
need to re-watch that
Bennelli