Crackajack wrote: No need to join - just use the :site search command on Google. They seem well indexed.

I've now joined AAAC and I'm not looking back. Turns out my pleated pants were the right choice for a skinny dork, haters didn't know!
blackham

blackham wrote: how do grenson's and tickers come up?
one size down from nike, and half a size down from my usually dress shoe size for me
InfiniteJim

Bit of a find - brand new Trickers Derby's for £15 from a charity shop, my size too…

forgotten the name of a brand that, I think, are spanish or italian. Have some monk shoes similar to the grenson ellery. Anyone have any thoughts of what it could be?
Crackajack

Crackajack wrote: Meermin?
That's the one, cheers. Anyone know how they fit?
mAK

half size down from nike for me
datsun

Anyone had any shoes / boots from Scarosso? Some very fruity choices, but the more classic stuff looks good.

Markowski have some similar monks to grenson ones, but so do loads of places now.
Sneakysbest

whats the best suede protecter going? just got a pair of loakes in a brown suede and really don't want to fuck them like i do all my other pairs of shoes

Bit of a weird request, but where can I find white leather boots/shoes with a vibram sole? 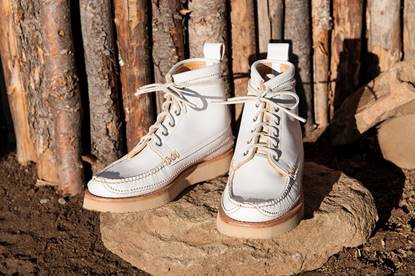 I'm a lazy fucker and spend my life in white trainers (buttero and converses). Now I want something smarter/more durable. I like these Yuketens but they're only available by special order. Also Grenson's are gross, don't recommend them.
ginner

This stuff is best by miles for suede protection.


Any you guys know if Ultra Boosts run true to size?

Do church's fit TTS. They don't have uk 12 on End so wondering if I could get away with an 11?
ShaneB