that girl from miami ink the show does it for me, kat von d its the kind of girl i would never go for so shes a bit taboo.
stevomacca

I got a few, all have personal meaning to me, and most are on my back so i don't see them much so don't get sick of them.
Got another design finished and hopefully get it done in the summer.
My brother-in-law has a wee devil tossing off tattood on his upper arm, looks hilarious, he got it done when drunk and 16. Now's he's 30 with a kid and is about to get a coverup done. My sister doesn't like it too much when he takes my nephew to the pool, especially during toddler-hour!

illwill wrote: Tattoos on girls are a big fucking turn-off for me. especially those shits on the small of the back. it definately does just make you look like a whore.

.
My bird has one on her shoulder, I hate it. Common shite.

A little lizard her friend drew for her from art school.

Her friend was blatently shit at drawing.
Larry

A lizard of all things, they are not even nice things to look at, so I can imagine a badly drawn one. Was it kind of a comic caracter lizard or was it
some wannabe mystical far eastern affair?
mr.white

hes posted it up before.,… this is it 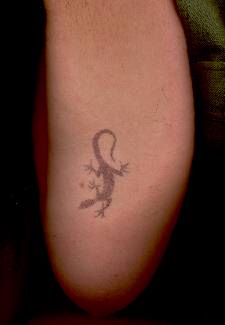 I have given her enough grief over it but nowt I can do about it now.

Not nearly as good as my friends Tazmanian devil tattoo he got when he was 16.

My mate's having a sleeve done, on his arm, so far it's taken him a year to get about a 1/3 of it done.
Larry

Someone repost the tat of the mermen again.

My mate's having a sleeve done, on his arm, so far it's taken him a year to get about a 1/3 of it done.
my brothers friend has a tree trunk going up his arm which spawns into branches/leaves on his back. hideous
misled

My mate's having a sleeve done, on his arm, so far it's taken him a year to get about a 1/3 of it done.
my brothers friend has a tree trunk going up his arm which spawns into branches/leaves on his back. hideous
My mates got a little more going on then a tree trunk.

People who all had Tazmanian Devil tattoo's are fucking legends

Oh how they must regret it now
mr.white

one of my mates has 13 tattoos :o ones a big panther crawling up her back. thing is shes tiny and not the kind of girl you'd imagine with them at all, so they're not too good.. she got them done cause her ex boyfriend was a tattoo artist.
morning mist

nice, but a few grands worth of ink there.
Ricer

Conan wrote: I'v always thought of getting one but a design just hasn't stood out for me yet. Not sure where I'd get it either
Im the same….nothings ever caught my attention enough to think "yeah i want that on me for the rest of my life"…..would love big wings on my back but theres no way I could get that done for my first tattoo…ya'd be in bits with it.saw a thing on celeb tattoos the other day & it showed Method Mans one (http://www.designmytattoos.com/celebtats/methodmantattoos.htm) which reads "Life" but then once turned upside down it says "Death" which I thought was kinda cool…ambigrams theyre called….lead me to this website where you can get your name like that etc
Wouldnt mind one like that on my leg or something

ive got two and i dont regret them, each one reminds me of what was going on in my life at that time, good wee remider for forgetfull peeps.
you could worry if you will still like it when your old and saggy but who says you'll make it to be old
i agree with the wait a year thing tho
karmen19

how much do tattoos actually hurt and do they hurt more on different parts of your bod?

how about your chest?

as im working on a design for myself at mo which is personal to me and cant decide whether to have it done on my chest or just below my neck on my back!

i do not want it to look jailer style!