General Discussion: Today I am slightly obsessed with...

Sleuth wrote: I wish we went back to the moon, would be curious to see if the US flag is still there.
Why wouldn't it be ?

nick2 wrote:
Sleuth wrote: I wish we went back to the moon, would be curious to see if the US flag is still there.
Why wouldn't it be ?
BECAUSE IT NEVER HAPPENED!!!!!! DUN DUN dunnnnnnnnn
Murakami

The LHC again , so they have discovered that some subatomic particles can travel faster than the speed of light which is thought to the be the universes speed limit …. does this mean we can finally go back in time and give Candidates parents contraceptives
Rez

Quite bitchy for you Murak

The 'bling ring'. Group of kids/criminals stealing from celebrities in America

'For their first celebrity target, Prugo claims that he and Lee asked themselves "who would leave a door unlocked? Who would leave a lot of money lying around?", and chose Paris Hilton because they figured she was "dumb".[17] On their maiden trip to Hilton’s home, Prugo and Lee went alone, having used Google Earth to find a place to access her community via a hill climb.[16] They went up to the front door and tried ringing the doorbell to see if anyone was there. They discovered a key under the doormat, but then realized it wasn’t needed because the door was unlocked'
nick2

This part of Mexico city, I can't believe how many houses/people there are in Mexico City.

Some interesting buildings were proposed….

A chicken can be hypnotized, or put into a trance, by holding its head down against the ground, and continuously drawing a line along the ground with a stick or a finger, starting at its beak and extending straight outward in front of the chicken. If the chicken is hypnotized in this manner, it will remain immobile for somewhere between 15 seconds and 30 minutes, continuing to stare at the line.

'In July 2011, an Austrian atheist, Niko Alm, won the legal right to be shown in his driving license photo wearing a pasta strainer on his head, after three years and an examination certifying that he was psychologically fit to drive. He got the idea after reading that Austrian regulations allow headgear in official photos only when it is worn for religious reasons.'

This lake in India, with the most stunning looking hotels in it and round it.

nick2 wrote: This part of Mexico city, I can't believe how many houses/people there are in Mexico City.

Wow. Looks amazing. Been meaning to go there for years but never got round to it.
Cycle past it enough!
rural

After talking about that graveyard House in the architecture thread, decided to take a look at Highgate Cemetery and found 'Egyptian Avenue' (not my pics) 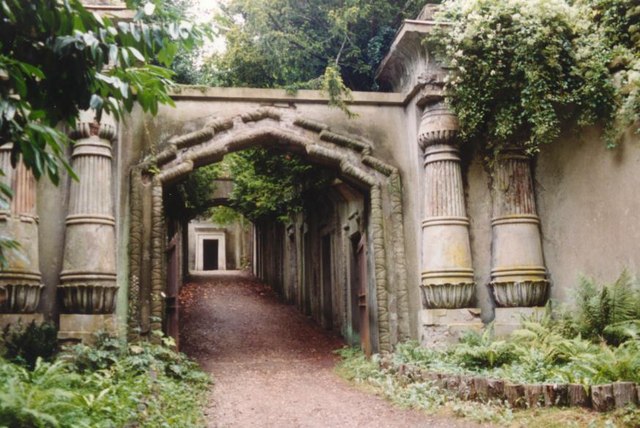 I think the Egyptian bit is closed to the public now, due to vandalism, there are some real cunts about.

But the cemetary in general is very interesting.

The cemetary island just off Venice is awesome too.

nick2 wrote: The cemetary island just off Venice is awesome too.
Been there, is fascinating. Might sound a bit morbid/strange, but i like interesting Cemeteries, the one in Kensal Green is worth a look.
ross