yea its the chhange of the side mesh pannel im not as keen on,dont get me wrong soon as i see them at a good price il be having a pair!id like a hockney as well this year i think.and that paclite will be mine in blue so sweet
beam

yeah i fancy a pair of those brown hockneys, g-alpines and the paclite…favorite items seen so far, though i would love it in blue, jake got back to me about them, but only an xl in yellow and black, as i understood it. not sure if im going to go for one, just yet.
seenmy

I'd like more FTBs and maybe go for some hockneys
Ruben

Just saw this on sufu:

better than the neon camo, still its very close to regular excisting woodland/ eastern block camo jackets. plain bickles are far better, even more than the harris gore tex that came out in a/w. the olive/brown nubuck i still my fav.
Paolo G 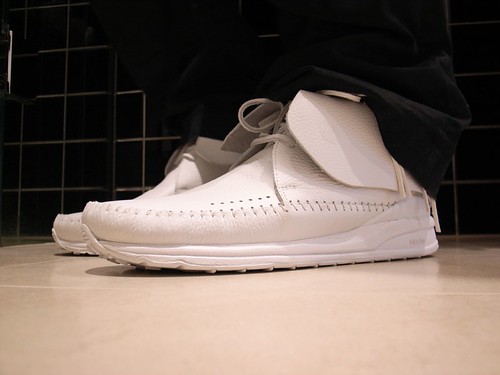 fucking sick
vis isn't really my bag but they are ill. Best ones i've seen yet.how much and where from?

Awful imo.
BYE BYE VISVIM….THE FANBOYZ ON THIS THREAD WILL STAY WITH YOU, BUT THE SENSIBLE PEOPLE HAVE GONE…GOODNIGHT.
purple

^^^ Looks shite, someone on SF was wearing the same jacket. Visvim should stick with the shoes.
Noble Locks

"Hey Mr Okinka, we are selling a lot of these clothes now, we could be the next Nigo, put some camo on all the gear and cross you fingers, this time next year we could be billionaires."
Hello World

They should stick to what they are good at, shoes and accessories (wallets, bags, belts etc)

The clothes have always been overpriced and nothing special.
seenmy

i think thats a bit of a brash statement to be honest,visvims clothes are subtle and well made generally well thought through unlike 90% of the rest of the market they use tech materials in different ways and generally produce tasteful alternatives withsimple touches,granted along with everyone they drop a few clangers and this gline stuff is a bit more brash to suit the us market.but imo visvim are still producing some of the best clothing.
Noble Locks

was you ever into bape at the start off when it was like visvim seen?
stoney

i had a few bape pieces over the years but to be honest i was never impressed with quality and niether of the cuts fitted me right.so I was just buying then ended up getting rid each time never been a camo fan
Noble Locks

stonefish wrote: the lime fbt's smoke
i like them cos i like the shoe and always will…but dont you think that they are 'Way Out' enuff as it is, without the need for klaxon style gimmicks as well?
next step is a yellow/pink/orange patent leather and a camo version…mark my words, i will quote this post when it happens.
Noble Locks

slagging off the 'sell out' aside for a moment…that fucking jacket looks well nice on this geezer.