Menswear: What are you wearing today, pics only and LIST what you are wearing!

And yes noble they do.
link me to factory done prewashed apc's family, needs me some of dat blessy action.

And yes noble they do.
link me to factory done prewashed apc's family, needs me some of dat blessy action.

never seen them online, think they only sell the butler series instore. i did see three really amazing pairs in apc berlin for around 200 euros.
Noble Locks

i thought the butler series was someones old jeans that they had worn and then swapped for new ones with apc, so effictivley just worn in denim not pre-washed.

Would like a link too if they sell them online. I rotate too much to get any fades/signs of wear.
Noble Locks

same here. can only get proper fades from buying someone elses worn denim.
got neighborhood and hysteric glamour done at the factory by hand, beat ta fuck jeans and they are bare o.p (just never as good as done by someones hard wearing), so would rally like to see the ones apc do at the factory by the hard work of phillipiney virgins as well just to compare and see how they look.
Noble Locks

nope from me. too contrived.

edit = look much better on.
figurine 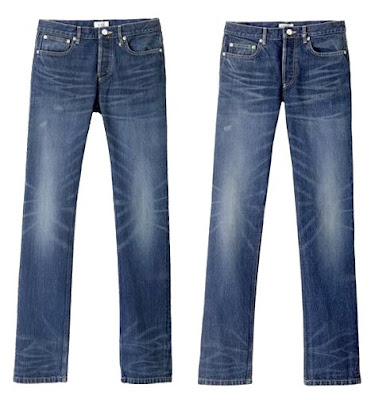 They release washed jeans but not often, part of the madras range i think.

They lack the personal touch for me, like phone fades or condom fades on the back pocket etc.
Ketters

Just washed my New Cures for the first time since I got them about three years ago. Fades look pretty ace, but that wasn't why I washed them. The blood stain (fell over in a club and gashed my leg open

) is still prominent as ever.

last time they did the pioneers was years ago
Noble Locks

really?
then im still of a thought that apc dun do a pre washed denim, just sell you a pair that some other fucker has worn for you.
zoom, wagan, you started this shit saying 'yes they do do a prewash'.
was you just chatting bare shit and gassing me blud?
padawan

The pic MoB posted is from A/W 09 look book iirc, they haven't done them since then I don't think other than just the seasonal denims in different sold colours and lighter weight denim.
Double.0

Stiff pose to show the fit of the jacket, still undecided

all gravy above on both for me. thought id hate that jacket, buts its bare op and got me gassing.
beedub

Got to agree with Noble, thought the jacket would look shit but it's not too bad on. Don't like the cropped trousers though, especially with the boots. I also think a shirt would look better than a T under the jacket.
hate